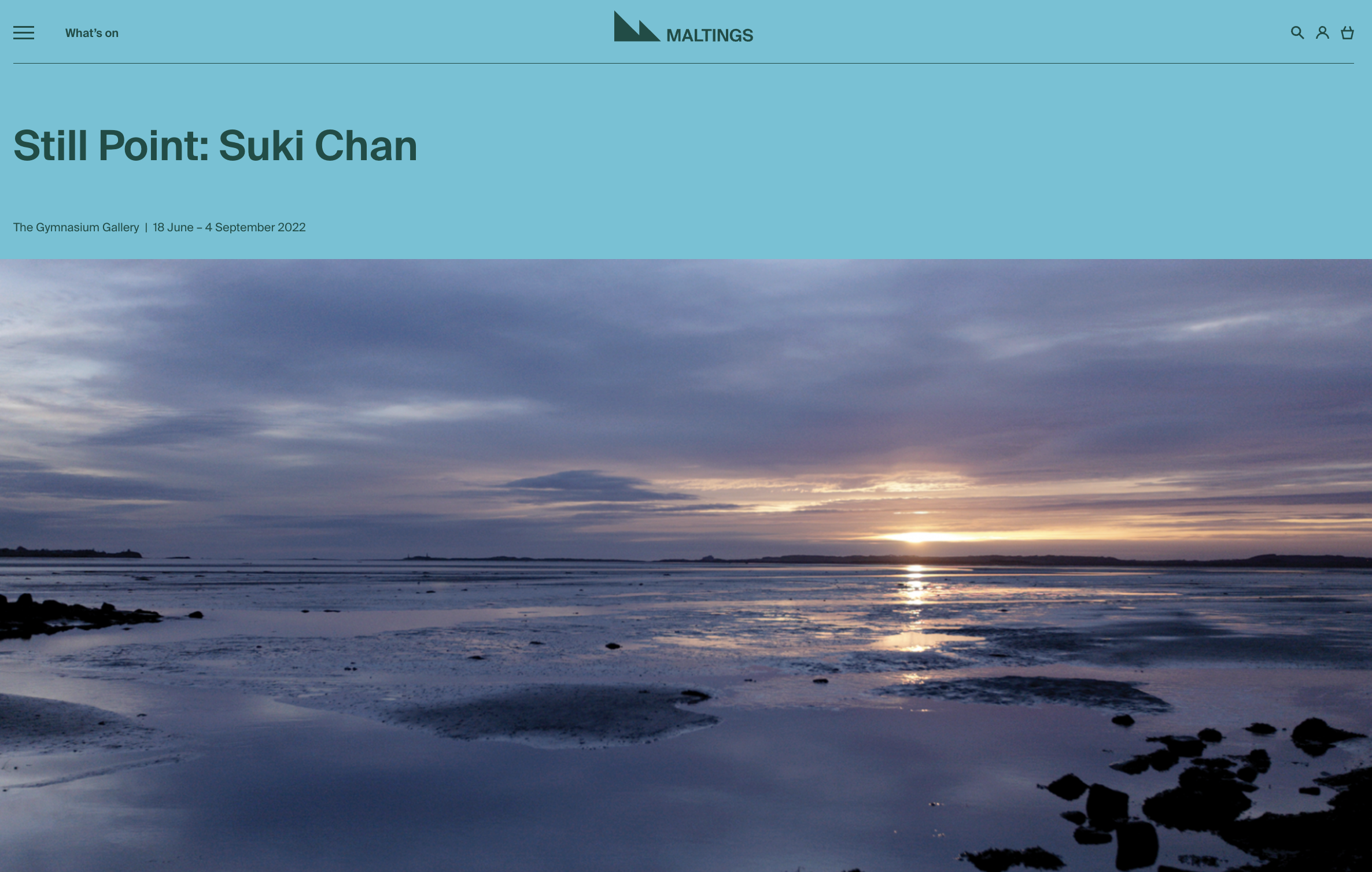 The Gymnasium Gallery, Berwick-upon-Tweed, 18 June - 4 September 2022
Solo Exhibition: Still Point will be shown part of Lindisfarne Gospels 2022 – a programme of events inspired by the display of the Lindisfarne Gospels in the North East in autumn 2022.

Interalia Magazine, April 2022
Review of CONSCIOUS by Dr Marius Kwint, Reader in Visual Culture at the University of Portsmouth. 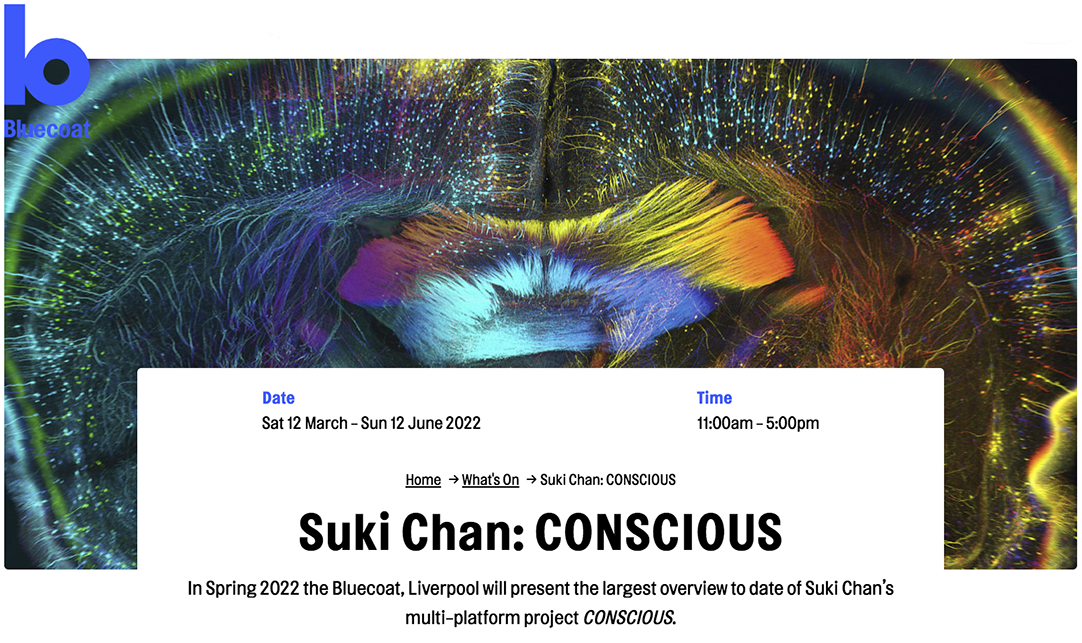 CONSCIOUS brings together different perspectives from scientists and ordinary people
which shake up our preconceptions about individual and collective consciousness.
Anil Seth and Suki Chan in Conversation: 8 June 2022
A coffee morning with Wendy Mitchell and Suki Chan: 19 May 2022
The Bluecoat: Sat 12 March - Sun 12 June

A solo show bringing together works from the CONSCIOUS project to explore the personal perspectives
of author Wendy Mitchell as she navigates the fog of her dementia alongside personal stories
from residents, families and staff from Belong care village.

Tea and cakes with Wendy Mitchell and Suki Chan: 7 May 2022
In conversation with author and lecturer Adrienne Dengerink Chaplin: 9 May 2022
Danielle Arnaud: Sat 19 March - Sat 7 May 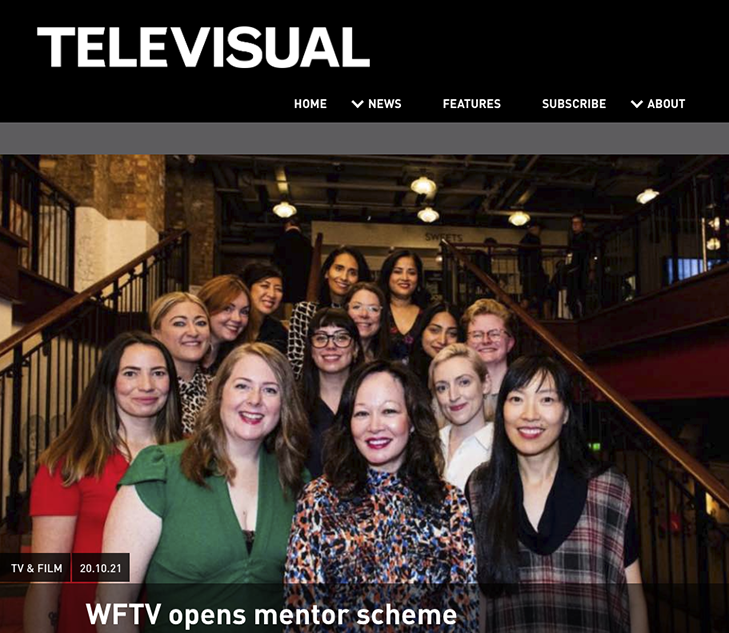 Chan has been selected for this year's Women in Film and TV (WFTV) mentoring scheme. The programme is designed to support women to
take a significant step in their career. Chan will be mentored by Jessica Bendien from Bang Talent.
Women in Film & TV 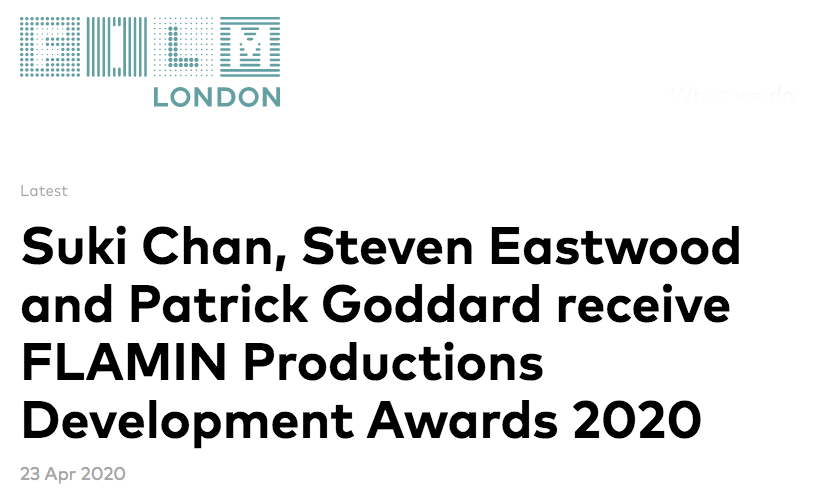 Chan has been selected for Round 9 of FLAMIN Productions, a major moving image artist award committed to nurturing talent and supporting
innovative artists in their professional growth. FLAMIN Productions is supported by Film London in partnership with Arts Council England, London.
FLAMIN Productions

Chan has been awarded a ScreenSkills bursary to develop new skills in Virtual Reality.
ScreenSkills

Lucida III will be included in SEEING, Science Gallery London, UK
SEEING explores the subjectivity of sight, the other senses that shape our view of the world, and the unexpected parallels between human and machine vision.
22 July - 1 November 2020 (Exhibition postponed due to Covid-19)
Science Gallery London

Chan has been awarded a National Lottery Project Grants Award from Arts Council England for the production of CONSCIOUS.

Sleep Walk Sleep Talk will be included in Circadian Rhythms: Contemporary art and biological time at The Glucksman,
University of Cork, Ireland. The exhbition explores Circadian Rhythms through reflections on time, the cadence of working life,
sleeping patterns, as well as through the impact of modern technologies on biological life. 3 August 2019 - 4 November 2019
Glucksman

This February, Chan is artist in residence at Belong Care Village in Crewe. Part of 'Where the Arts Belong project,'
a three year project with Bluecoat bringing arts experiences to people living with dementia.
Bluecoat Liverpool

Chan has been awarded a Developing Your Creative Practice Award from Arts Council England for the development of CONSCIOUS.

Sleep Walk Sleep Talk will be included in London Nights, a major exhibition at the Museum of London exploring the city
after dark through both contemporary and historic imagery, ranging from the late 19th century to the present day.
Museum of London

Chan has been selected for or the new round of Film London Artists' Moving Image Network's New Approaches initiative,
a Creative Skillset-funded scheme that supports artist filmmakers working on feature-length projects.

Chan has been awarded a Wellcome Trust: Small Arts Award for her ambitious touring project, Lucida.

Chan has been awarded a National Lottery Project Grants Award from Arts Council England for Lucida.

Still Point is included in A Light Shines in Darkness, a FVU touring project to churches and cathedrals around the country,
re-illuminating inspiring public spaces and prompting viewers to see the locations in a different light.
St Catherine's Chapel, Norwich Cathedral & St Werburgh’s Church, Derby, UK.
Film and Video Umbrella